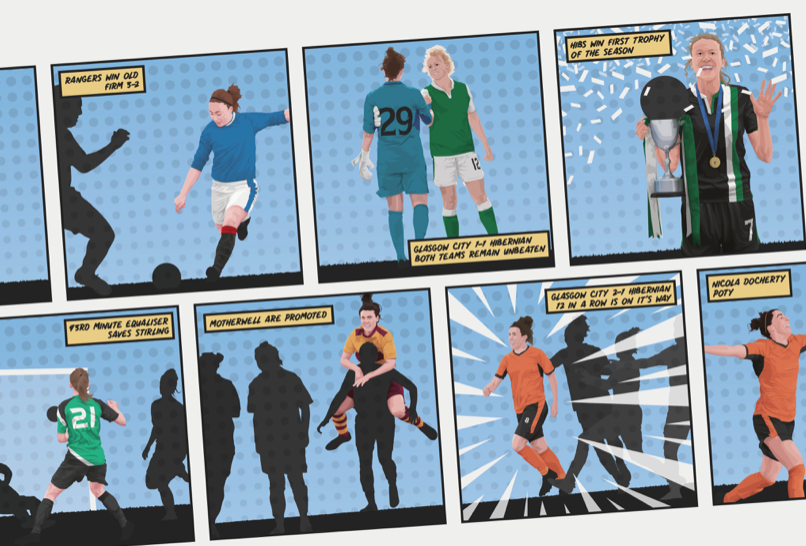 The return of high quality football magazines and annual publications that you can actually hold in your hand has been one of our favourite things to emerge about football coverage both home and abroad over the last 18 months or so. Whilst we live in an age where we crave information at the instantaneous click of a button for many turning the pages and switching off from the rest of the world is still a past time to be savoured so when Leading the Line heard about the How’s Your Touch Annual we knew we had to speak to it’s creators Matt Dallinson and Peter Osborne.

Below they discuss their journey so far, what kind of content you can expect to find when you inevitably decide to purchase it and share their thoughts on how best to grow women’s football, one of the key subject matters throughout the annual. I’ve linked to the Kickstarter at the bottom of the page but for now let’s get straight into it. 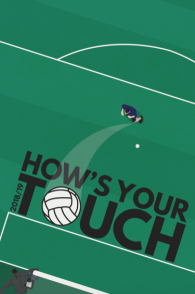 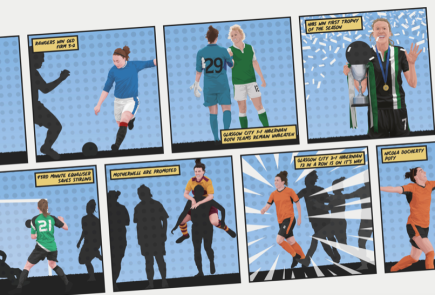 Leading the Line (LTL): Thanks very much for speaking to Leading the Line, before we get into the annual itself tell us a little bit about yourselves and your journey up until the point where you decided to begin the How’s Your Touch Annual project?

Matt Dallinson (MD): Thanks for speaking to us. I’m primarily an illustrator but I also studied Geography at Heriot-Watt (graduating this summer) which is where I met Peter. Before How’s Your Touch I’ve done work for Nutmeg, These Football Times and most notably Hibernian.

Peter Osborne (PO): I’m just a football fan who loves all the stupid bits about the game. My favourite player isn’t based on stats or trophies but on how long their name is like Jan Venegoor of Hesselink or the fact that John McGinn has a big arse.

LTL: I’m sure John will be delighted to hear that, so what is the How’s Your Touch Annual?

MD: How’s Your Touch is an illustrated annual of the 2018/19 footballing season in the SPFL (Scottish Professional Football League) and SWPL (Scottish Women’s Premier League), covering all the teams equally. There’s interviews with some major figures in the Scottish game, features about Scottish Women’s Football, the Highland and Lowland League seasons as well as our “Odes to Idols” series scribed by some of Scottish football’s finest writers.

LTL: Sounds great! Heard there’s also Pie of the Season feature. The guy who’s writing that is one of the very best too! So, what made you decide that Scottish football needed such a wide reaching annual in celebration of the 2018/19 season?

MD: With the work I did for Hibs a lot of fans commented that they wanted a full season book of the games and moments illustrated and so Peter and I decided to take it upon ourselves to do so. We knew from the start we wanted to focus on the 30 SPFL teams outside the top tier that typically get very little coverage as well as giving a spotlight to the women’s game that we are both big fans of.

LTL: You’ve touched on this already but can you give a little flavour of some of the content?

MD: There’s a recap of every week including the scores. We have our 7-a-side Teams of the Week and a little reminder of the important fixtures. This is alongside Moments of the Week which are fully illustrated by me and range from a tongue in cheek look at Ray McKinnon to honouring Dougie Imrie’s 500th club appearance.

LTL: Committing to week by week coverage is some task. What led to your decision to review the whole of the 2018 SWPL season, and how long did that take pulling everything together?

MD: We wanted to shine a spotlight on women’s football because it’s so often put down and ignored when it really shouldn’t be. We wanted to include it in our fan season reviews but with limited resources we felt it was best to write it ourselves as finding fans to write for us at this stage in the game’s development would have been challenging. We’ve been pulling it all together over the season and we’ve watched all the games and highlights that we could find! Writing out all the result is taking some time but we didn’t want to leave any stone unturned.

LTL: Women’s football is obviously very important to the annual, we’re speaking during what is turning out to be the biggest Women’s World Cup to date, what would you like to see happen to help grow women’s football going forward, in Scotland and across the globe?

PO: I would love to see a growth in the fan culture around the SWPL with the likes of fan groups, fan pages and fan media. That’s been great for male Scottish football and think it would be even better within the SWPL. Just really focusing on engaging people with the game and then in turn the clubs engaging with fans as well. Also I love the idea of a Glasgow City ultra group (LTL Editor note: other women’s teams are available), of which would probably be mostly female, organising a pre match march to Ainslie Park for title decider against Hibs. No pyro, no party!

MD: Obviously eventually I’d love to see it go professional and full-time but I think it’s important to grow it sustainably so we don’t lose teams like Forfar Farmington and Glasgow City. But in the main I think the same as Peter really, I want to see better promotion from clubs – especially the big ones like Celtic, Hibs and Rangers – and to get more eyes on the games. Obviously it’s tough running women’s sides on considerably smaller budgets but I would love to see at least one try to replicate the successes of Atletico Madrid or Juventus in getting a big attendance at their “home stadium” (LTL Ed Note: Atletico Madrid’s home game against Barcelona saw a women’s world record attendance of 60,739 turn out at the Wanda Metropolitano whilst Juventus’ Serie A match versus Fiorentina at the Allianz Stadium attracted 39,000 spectators).

LTL: I think it’s hard to argue with any of those ideas. Moving away from the SWPL review is there anything else in the annual that you’re particularly proud of?

MD: Obviously the interview with Lana Clelland was massive, still can’t believe she agreed to speak to us while we weren’t really established. Aside from that though I’m really proud of the illustrations I’ve done for it, being able to send them out as prints to some of the players is amazing and I’ve had some compliments from them which is fantastic.

PO: I’m very proud of the fan season reviews. The ones we’ve got back have been really insightful and give a view of a club’s season that we never could have given. A lot of times people say they’re by fans for fans and it’s just a tagline but I think we can genuinely say that as we are fans ourselves and we are literally giving fans a voice for their own clubs.

LTL: It’s a fantastic piece of work you’ve put together but for those still on the fence why should anyone reading this interview buy the How’s Your Touch Annual?

MD: Everyone should buy the annual because it is a great memento of the season, even if it’s not been too memorable for your club it’s a fantastic way to remember the good times and some of the patter moments that have occurred throughout Scottish football. Every team is guaranteed equal treatment so it doesn’t matter if you’re Celtic, Montrose or Albion Rovers your club will be there.

Matt and Peter have set up a Kickstarter where you can not only guarantee your copy of the How’s Your Touch Annual but also order one of the 12 Icon Prints that Matt has illustrated. The link to do so can be found, here. You can also follow the lads progress on Twitter @HYTAnnual and of course you can follow the latest flights of fancy from Leading the Line on Twitter @MFPTasty.