Welcome to the third and final Opposition Focus of this Women’s U19 European Championships. I say final as, barring a highly unlikely series of results, Scotland will unfortunately bow out of the tournament at the group stage after a 4-0 defeat to a talented Norway side on Friday night. Instead of giving a blow by blow summary of the game I’ve attached my match infographic form the game that was shared via Twitter post-match. 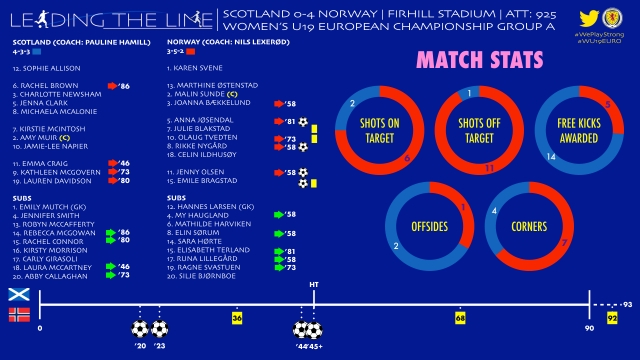 This competition was always going to be a learning experience for the squad and Monday’s final opponents The Netherlands will provide another stern test despite a mixed bag of results which sees the Dutch requiring a victory from their final game to ensure progression to the semi finals which are to being held this Thursday before Sunday’s final. But do our girls have a chance to claim victory, it’s time to put the Dutch into focus? 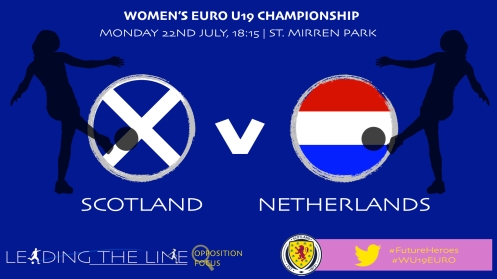 The 2014 winners have a strong recent record having been semi-finalists in two of the last three tournaments. Their 2014 triumph has been their only one to date where they defeated current reigning champions Spain 1-0 in the final with Vivianne Miedema, 2019 WSL Player of the Year and record goalscorer for the Oranjeweun, scoring the only goal of the game. The Scots faced the Dutch that year in the group stages with Miedema scoring two during a 3-2 win for her side.

In last year’s tournament Jessica Torny’s side finished third in their group after losing out on the head-to-heads with Denmark and Germany something the coach will be keen to avoid this time around.

It was three wins from three as the Dutch would end up comfortably qualifying from Elite Round Group 3 despite a potentially tricky draw which featured Iceland, Russia and underdogs Bulgaria. A 6-0 victory over the Bulgarians would then be followed by a 1-0 win against Russia. Whilst a point would have been enough to confirm qualification for the group hosts an 87th minute Jill Baijings goal ensured a 2-1 victory over second seeds Iceland as the Dutch progressed to this summer’s tournament with a 100% qualifying record.

Prior to taking up the role as U19’s national team coach in 2015 the 38-year-old Torny was assistant coach for the Dutch Military side before a three year spell in charge of Heerenveen where she achieved a best placing of 4th in the 2013-14 BeNe League, a now defunct league that pitted the best Dutch and Belgian clubs against each other.

Much like her senior side colleague Sarina Weigman who guided her side to this summer’s World Cup Final Torny favours a 4-3-3 formation, one which they haven’t deviated from since successfully coming through qualifying. In particular the interchanges between a front three that usually consists of Romee Leuchter, Kirsten van de Westeringh and Joelle Smits will look to provide a constant threat.

Their Tournament So Far

Lop sided. After a clinical 5-0 defeat of Norway, a result aided by some less than glamorous defending from the Norwegians, they looked on course for at least a point against France in their second group encounter. However two goals in the last five minutes from French substitute Melvine Malard saw them succumb to a 3-1 defeat in a result that had surprised many who had seen both sides compete in their opening games.

Whilst any one of the front three should be seen as a considerable threat to the Scotland rearguard it is perhaps Kirsten van de Westeringh who has shown herself the one most likely to step up when the moment matters. In qualifying she scored in every game including the only goal against Russia and the opener against the Icelandics as well as scoring during the 5-0 defeat of Norway in their tournament opener.

The attacker who usually plays on the left of the attacking three also has experience of the big occasion with her club side Ajax as she made her Champions League debut for the Dutch giants aged just 17 in August 2018.

It’s been less than six months since the two sides faced each other in a friendly at the La Manga Club in Spain. On that occasion the Dutch ran out 4-1 victors with a number of players from both sides present that day.

What are Scotland’s chances?

The Norway result dispelled any illusions about the quality of opposition Scotland have been up against in this tournament. The Dutch will be disappointed with the manner of their defeat against the French and with them needing a victory to ensure progression it looks set to be a tough Monday night in Paisley for Pauline Hamill’s side. If Scotland can marry the organisation they showed in the France game with a more clinical edge when they do create chances then you can never say never, but in reality, it will be a case of improving on the result from ties past. 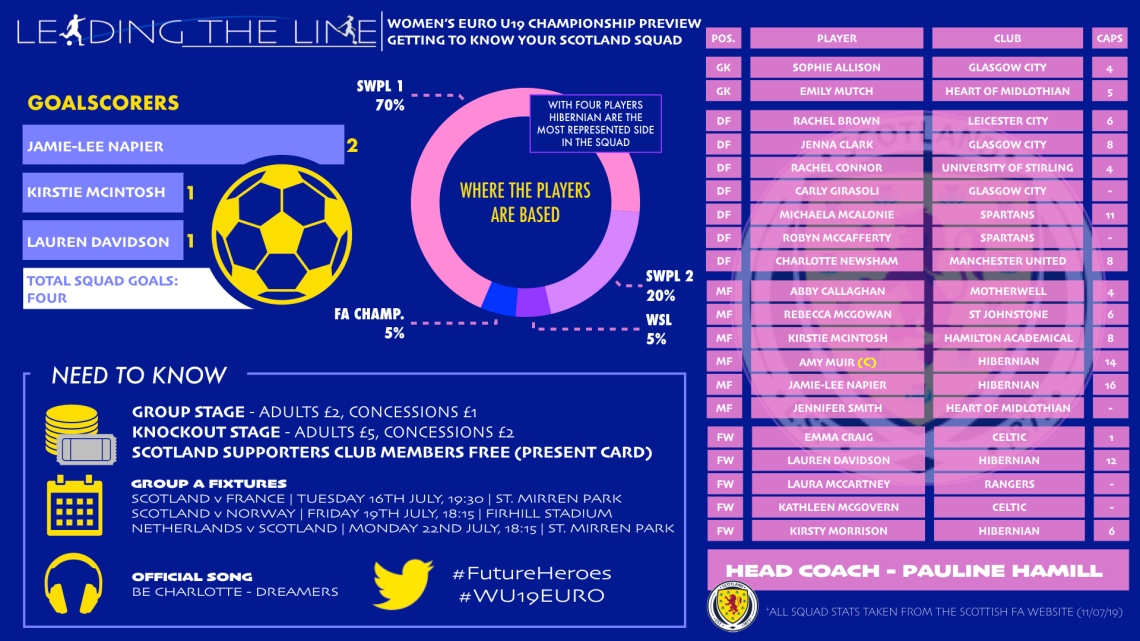 Scotland host Netherlands on Monday 22nd July at St. Mirren Park. Kick off is at 6.15pm with admission priced at just £2 for adults and £1 for concessions. Leading the Line will be attending the rest of the tournament even if Scotland ultimately fall at the group stage so remember to follow the latest flights of fancy from the site over on Twitter @MFPTasty.