Hamilton Academical take on Hearts in a top of the table SWPL2 clash as both sides sit on 27 points having won eight, drawn three and lost just two. Here at Leading the Line we’re providing one of our biggest previews to date ahead of Sunday’s game to help give you the lowdown.

Hamilton come into the game on the back of a six game winning streak which includes a 12-0 Scottish Cup victory over SWFL side Clyde last month. Since the league’s August return Gary Doctor’s team have picked up a maximum six points from two trips to Tayside. They followed a 2-0 win against Dundee United, where goals from substitutes Chloe Muir (Accies Player of the Month for August) and Teigan McCann earned the three points, with a 2-1 comeback victory against St. Johnstone in Perth. After Ellie May Cowie had given the home side a first minute lead a Dionne Brown double ensured their good run would continue in what was a poor game in difficult conditions.

Hearts’ are currently undefeated in their last four league games but their form since the break has been mixed. They suffered a heavy 7-1 defeat at the hands of Edinburgh rivals Hibernian in the Scottish Cup a game in which they went a goal up through Dani McGinley before finally succumbing to the constant waves of Hibs pressure.

In their first league match since the break they were held 1-1 at home by FC Kilmarnock whilst last weekend they came from a goal down to defeat Glasgow Girls 2-1 at Petershill Park with a 25 yard wonder strike from Claire Delworth and a Rachel Walkingshaw free kick breaking down a well marshalled home defence that, at times, the Jambos struggled to penetrate.

There has been two previous meetings between the sides in the league this season with Andy Enwood’s Hearts coming out on top in both occasions.

Back in February, on the opening day of the season, a spectacular Rachel Walkingshaw debut goal from the edge of the centre circle was the catalyst for a 2-1 comeback victory. Gillian Sloey had given the Lanarkshire side the lead going into half time but the Hearts midfielder’s strike followed by a Danni Pagliarulo penalty was enough to seal the points for the Edinburgh side.

In late April it would be another victory for the Jambos as they would run out 3-1 winners at Oriam. Walkingshaw was again on the scoresheet that day along with Scotland U19 international Aisha Maughan and Caroline Heron with Jade Lindsay getting the sole reply for Accies and there will no doubt be a desire amongst the Hamilton squad to reverse this current trend. 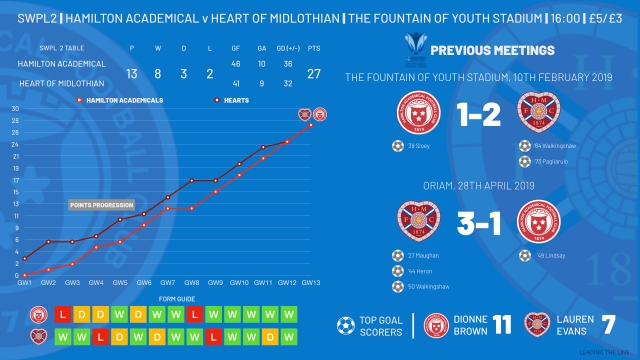 Two of the midfielders from the SWPL Mid-Season Select side both Anderson and Walkingshaw will have a key role to play in this Sunday’s fixture. Accies captain Anderson, who missed the victory over St. Johnstone but did return from the bench against Clyde, brings a level of assurance on the ball in midfield that few in the division can. Comfortable in possession and in working herself into space, Anderson is normally the metronome to which Accies keep rhythm too. She is also tenacious in the tackle something that will come in handy when taking on the enigmatic Walkingshaw.

The Hearts midfielder has a penchant for the spectacular and on her day can produce moments of skill that help to change the game as evidenced by her second half performance against Glasgow Girls last Sunday. That performance though came from the bench and it’s not the first time the former Spartans midfielder has started from the sidelines. Her impact in the big games to date should see her start this weekend but an increased work rate will be demanded from coach Andy Enwood, something that will be required if she is to come out on top of her battle with Anderson.

Hamilton striker Brown currently leads the SWPL2 scoring charts with 11 league goals and she is one of the most instinctive finishers in the division with her movement between opposing centre backs often finding space where others won’t always will. At times Accies are not afraid to play the ball over the top either and whilst she may not be the quickest, she still has sufficient pace and touch to get on the end of these balls and get a shot in on goal.

Her battle with Hearts defender Pagliarulo will certainly be one to keep an eye on come Sunday. Another member of the SWPL Mid-Season Select Pagliarulo brings some much needed vocal leadership to a some time inexperienced Jambos backline. The movement of Glasgow Girls’ Kirsten McGuire in the first half on Sunday caused problems in the Edinburgh sides defence and the challenge Brown will provide should be seen as a step up. As much as winning the individual battle will be key for the defender, her role will be just as important in ensuring those around her are where they should be.

This is a bit of a punt as both coaches have shown a willingness to change formation to match the opposition they will face. In recent weeks Andy Enwood has deployed wingbacks with summer signing from Forfar Farmington Smith occupying one of the two wide berths. The recent loan capture of full back Claire Williamson from Hibernian could see Smith pushed further forward but one way or another it would be fair to suggest that both Smith and McIntosh’s paths will cross at some point during the contest and in actuality, their battle will be as much about what they produce as to what they do to stop their opponent.

Smith has looked lively since her arrival but perhaps hasn’t always had the end product to match her possession although she was on hand to set up Hearts opener in their Scottish Cup defeat against Hibernian. Scotland U19 international McIntosh has played in a number of positions for her club side including in midfield but seems most effective when playing on either side of an attacking three where her pace and good delivery from the flanks often help to provide the ammunition to her fellow attackers. The youngster has chipped in with six goals this season and should Accies get ahead will become a dangerous option on the counter.

Thoughts from the Dugout

Hamilton Academical Assistant Coach, Robert Watson: “Every game in this division is really tough and on Sunday we expect no different.”

“We know we haven’t played particularly well against Hearts this season and hopefully that is something that will change this week.”

“The players have been fantastic over the whole summer, there is a real togetherness in the squad that has already pulled us through some difficult periods this season.”

“As a player and coach these are the types of games you want to be involved in. Nothing will be handed to us and we don’t expect anything to be handed to us. We have prepared well in the lead up to the match and hope we can get a big crowd into a fantastic venue fitting of the occasion.”

Hearts Head Coach, Andy Enwood: “The girls are all looking forward to the game. Both teams are out in front with a gap to 3rd so we understand the outcome will have a significant bearing on the title race.”

“As we enter the final stretch mentality will play a huge part, Sunday’s comeback and win has given the players extra belief and confidence.”

It’s a tough call with both sides possessing the most miserly defences in SWPL2.

In head to head contests the Jambos have had the better of the current league leaders but in neither instance was the result a forgone conclusion. Hearts summer reinforcements give them a depth of squad that few, if any, in the league can match whilst Hamilton’s only defeats this season have came against the Jambos, and in both those occasions it was in the final quarter of the game where the Edinburgh side took control.

Accies have strength in attack and a fast start could see Gary Doctor and his side avoid a third successive defeat against their title foes. Either way we’re sure to be in for a fascinating contest.

Sunday’s game is a 4pm kick off at The Fountain of Youth Stadium with entry set at £5 for adults and £3 for concessions and Leading the Line will be there covering the action.