Scott Booth’s side are in Copenhagen this Wednesday to take on a side managed by former Denmark international Per Nielsen and as always Leading the Line has been reviewing the tapes and searching through the world wide web to bring you the lowdown on City’s Last 16 opponents. 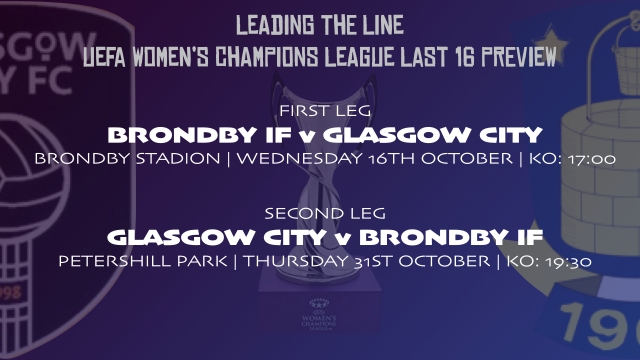 Brondby are participating in their 17th consecutive Women’s Champions League campaign having made it to the semi final stage on three occasions, the last of which was in 2015 where they were trounced 13-0 on aggregate by eventual champions 1. FFC Frankfurt. They qualified for this campaign as champions having got the best of domestic rivals, and fellow Last 16 side, Fortuna Hjorring in the latest round of their 18 year two way battle for the Elitedivisionen title.

In the round of 32 they were paired with Swedish champions Pitea and it would be Nicoline Sorenson that would prove to be key in both ties. In the first leg in Sweden she would score the only goal as her side claimed a 1-0 victory before her equaliser during a 1-1 draw in the return leg two weeks later was enough to see the twelve times Danish champions through to the Last 16.

As a note, they do have experience of facing Scottish opposition, as back in 2004 they faced then champions Kilmarnock in European Women’s Cup qualifying, where a side featuring current City midfielder Jo Love and Scotland Head Coach Shelley Kerr would lose out 2-0 to their Danish opposition.

Nothing to do with the game itself but, Copenhagen is one of my favourite cities in the world, fact, so for anyone making the trip I really hope you enjoy it. For the City players only some will enjoy the bright lights of Nyhavn and beyond with half the squad returning to Glasgow immediately after the game with the remainder returning the following day.

There should be no concerns with playing conditions given the similar climates of both countries but the biggest change for the sides is that due to stadium availability the home  and away legs have switched and City will hope to use that to their advantage as they look to get a positive result inside the 26,000 capacity Brondby Stadion before heading back to Glasgow for the second leg.

Pretty good. Per Nielsen’s side have not tasted defeat since a 2-1 lose to the aforementioned Fortuna Hjorring on 18th August and in their last two league matches have racked up 7-2 victories over both OB Odense and Thisted FC, although they currently sit second in the table, one point behind pacesetters Farum BK with ten games of the season gone.

As already highlighted when looking at their journey to this stage the benefits of 22-year-old Danish international Nicoline Sorenson have already been laid out for all to see with the forward having also added seven league goals to her season tally.

Perhaps the biggest threat though will come from experienced midfielder Nanna Christensen. Currently top of the 3F Ligaen goalscoring charts with nine goals she brings a wealth of international experience having been capped 98 times for her country over the course of the last decade.

When the draw was made Brondby were one of the few sides that City would have thought they would have a chance in competing with but there is no doubting the Danes quality and pedigree. Whether those attributes come to the fore on Wednesday night remains to be seen but either way Scott Booth will be keen to bring the Danes back to Glasgow still with a chance of a record breaking progression.

Remember you can now follow Leading the Line on Twitter, @LeadingtheLine. Here there will be live insight from the games, comments on the breaking stories from the world of women’s football news as well as early sight of what will be coming via the podcast and on the website. It’s right good!