It’s international week so once again Leading the Line is here to narrow focus on Scotland’s next Euro 2021 Qualifying opponents, Albania. Shelley Kerr and her squad will have fond memories of their last trip to the Adriatic coast, and whilst a history defining moment won’t be on the cards this time around three points on the road to England will be seen as the aim as Scotland take on Group E’s bottom placed side.

This is only Albania’s second European Championships campaign, having made their debut during the 2017 process. They were placed in a group alongside France, Romania, Ukraine and Greece ending qualification bottom with a record of played eight, lost eight. Their attempts to qualify for France 2019 were slightly more fruitful, although ultimately resulted in failure. They came top of their preliminary round group before earning their first win in full qualifying, courtesy of a 1-0 victory over Belarus, at a stage where they also faced Scotland.

Scotland’s 2-1 win in Shkodër will go down in history as the day the women’s national side qualified for their first ever World Cup after what ended up being a nervy encouter with high stakes at play. A Kim Little volley in the ninth minute seemed to have Scotland on their way, however despite the chances created as a result of ball domination a second first half goal failed to come and the Albanians equalised just before the interval through Megi Doci. Scotland wold prevail though as a 68th minute Jane Ross header would seal victory and World Cup qualification with rivals Switzerland only able to draw against third placed Poland.

Whilst Scotland only have an 8-0 victory over Cyprus to call upon this will be game four of the Albanians competition having hosted both Portugal and Finland before making the trip north to take on the Finns in Vassa in a tough opening trio of fixtures. They started their campaign with a 3-0 loss at home to Anna Signeul’s side. A header from striker Linda Sällström gave the visitors the lead inside ten minutes before another header this time from Heidi Kollanen after 26 minutes made it two. The game was wrapped up before the interval when Sällström capitalised on an Albanian defensive error to slide the ball past keeper Viona Rexhepi.

In October, they again fell at home this time to Portugal, with Lyon’s Jessica Silva scoring the only goal of the game on the 16th minute, the forward’s quick feet finding space after the Albanian defence failed to clear their lines. Four days later they faced the Finns again, suffering their heaviest defeat to date as the current Group E leaders ran out comfortable 8-1 victors with Sällström again the tormenter in chief, the Paris FC striker scoring four that day. A combination of poor defending and clinical finishing put paid to Albanian hopes although they did get on the scoresheet courtesy of a deflection from a Doci shot. As it stand they sit bottom of the group, yet to pick up a point.

What to expect – An attempt at at analysis

History has shown that the Albanian’s at home are a much tougher proposition than when on their travels, something that Scotland themselves can attest to when looking back on World Cup Qualifying, and in Doci they have a player who has done it before against Scotland. That said it is the continued failure to improve their defensive organisation under head coach Vioresin Sinani that will hamper any thoughts of causing an upset.

Looking back to Scotland’s opener from their last visit in September 2018 the Albanian midfield’s inability to maintain their tracking of runners ensured that not one but two Scotland attackers were in position to strike unmarked from around the penalty spot. The defender on the six yard line was also caught on her heels following the cross ball meaning that any opportunity to close down was lost allowing Little more space to aim towards goal. Something she did with unerring accuracy as her sweetly timed volley sailed past Rexhepi to give Scotland an early lead. 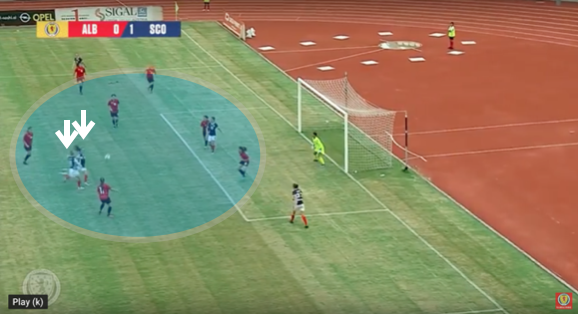 Fast forward to September of this year, and the visit of the Finns, and it appears these lessons are still to be learned. For the Finnish second goal the good movement of Sällström (Finland’s central striker), a commodity Scotland have an abundance of in attack, sees her in open space to receive the cross between the two centrally positioned defenders. 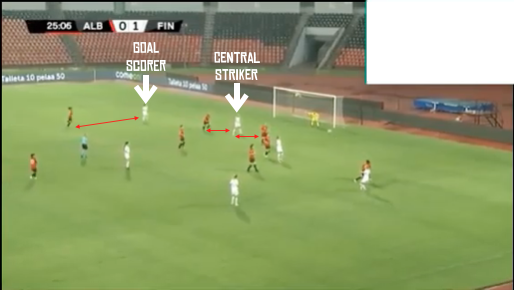 Sällström is not the only option though, as the run of Kollanen at the back post ensures that she too is in position to convert from a good delivery, something that she does with relative ease having been left untracked by the Albanian full back, her diving header putting her side 2-0 up and in control with less than half an hour on the clock.

The Albanians often will defend in numbers however still appear to lack the defensive structures to thwart an attack and can be easily moved around the pitch, something that the Finns did to great effect in the reverse fixture in October, perhaps best demonstrated by the space afforded to Kollanen again just a month later. 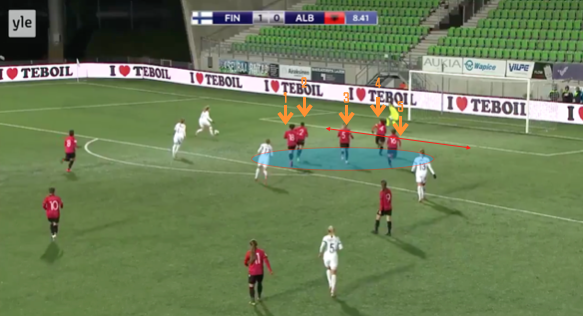 In the scene above the Albanians have five players within the breadth of the goal mouth with the full back sucked inside due to the original direction of the Finnish attacking play. Finland, much like Scotland, are a far better side than the Albanians at this juncture and were able to release the winger in space to convert her side’s second of the game. In summary, movement both in passing and in attack will be key in seeing the Scots break down opponents that can be stubborn when allowed to defend from a stationary base.

Three points will be wanted to ensure Scotland continue on the path of least resistance with Shelley Kerr looking to take the nation to a third consecutive major tournament. They are already playing catch up to the Finns as a result of the number of games, although their trip to Portugal this game week will also be an interesting insight to where they currently stand under the stewardship of former Scotland Head Coach, Anna Signeul. Scotland have the quality to dispose of the Albanians handily however will know that anything other than a professional display could result in a slip up that nobody wants to see.