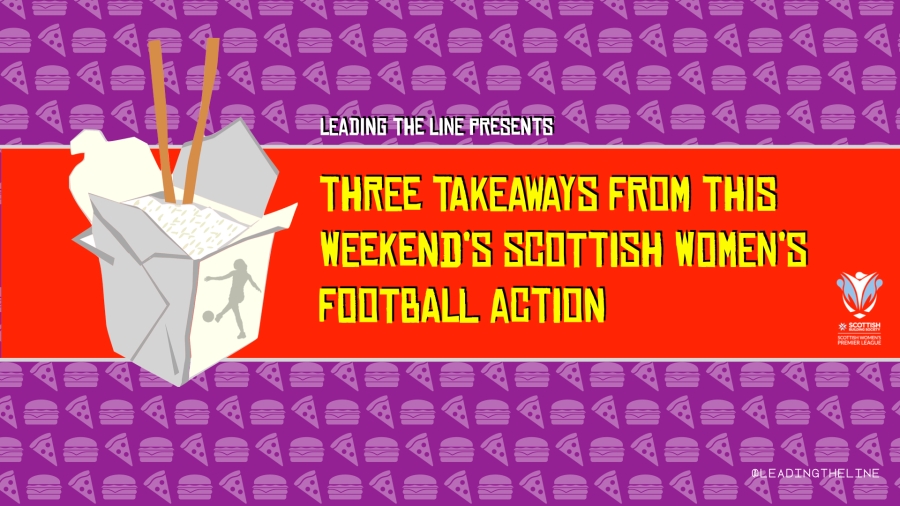 It was a mix of Scottish Cup Quarter Finals and SWPL2 action this weekend in Scotland so here are Leading the Line’s three takeaways from the action.

Whilst it wasn’t a vintage performance from Hibernian, a point that Head Coach Grant Scott emphasised at full time, the Hibees still had enough in the tank to defeat a well organised Hamilton Academical 3-0 and progress to the Semi-Finals of the Scottish Cup as they go in search of a fourth successive crown.

Central defender Siobhan Hunter was again on the scoresheet as a double against Accies took her tally to a remarkable eight in the last four games. That run started with a hat-trick against Edinburgh rivals Hearts in the last round of the cup before goals four and five against Spartans were followed by a Champions League goal against Slavia Prague. The goals have come in a variety ways too but it wasn’t Hunter’s yet-to-occur goalscoring exploits though that had me pitching hard for her inclusion in the “SWPL Team of the Season so far”. Nor was it her ability as a defender, although she is amongst the best in the league especially as a last line of defence, but more the fact that she is almost always entertaining to watch.

Always chatting on the pitch, a game rarely goes by without something emanating from a Hunter confrontation, as it did in the first half of Sunday’s clash with Hamilton. It may not be everybody’s cup of tea and I can imagine playing opposite her can make for an interesting Sunday afternoon at times but, in a game looking to grow, characters such as Hunter certainly stand out from the crowd.

Goals will matter in the SWPL2 Title Race

Hearts took advantage of Hamilton Accies cup distractions to take control of the SWPL2 title race, moving three points clear of their rivals after a 4-1 victory over a fading Partick Thistle at Petershill Park. Goals from Maddie Brill Edwards (who’s @oneinaBRILLion Twitter handle is one of the best around), Danni McGinley, Claire Delworth and Robyn Smith sealed what was in the end a comfortable win.

That win, as well as putting them three points clear having played a game more, moved the Jambos within one goal of Accies current +36 goal difference. Whilst it is a big ask it is not impossible to think that both sides could get to the end of the season undefeated and so goal difference may become the deciding factor come season end. Each will look to their games against SWPL2 basement side and whipping girls Hutchison Vale, who did at least get on the scoresheet again during their 10-1 loss to Dundee United this weekend, but it will be the goals scored in the more competitive encounters that could hand the title to Andy Enwood or Gary Doctor’s side.

As well as Hibernian, Glasgow City, Rangers and Motherwell secured their place in this season Scottish Cup Semi Finals. Three of the four sides competed in the 2018 tournament at this stage as Rangers replace Spartans with the Glasgow side having also made the Semi-Finals of the SWPL Cup earlier in the season.

City came out on top against Celtic in front of another healthy women’s crowd of 350, as goals from Kirsty Howat and a Leanne Ross free kick sealed victory in a game that Scott Booth’s side controlled at K Park. Rangers squeaked past Aberdeen thanks to a Clare Gemmell penalty with both managers acknowledging post match how close the Dons had come to causing another upset whilst last year’s defeated finalists Motherwell defeated Queen’s Park 5-0. Rising star Chelsea McEachran bagged a hat-trick with additional strikes from Lauren Doran-Barr and Myia Arbuckle rounding out the scoring.

There will be no doubt a desire from many for Hibernian and Glasgow City to juke it out in the final at Tynecastle come November 24th, especially with Hibernian’s 8-0 triumph over Motherwell in last years final still fresh in the memory, but both ‘Well, who have troubled Hibs and Celtic already this season, and an improving Rangers have to approach these final stages with the belief that they too can lift the trophy safe in the knowledge that the draw on Tuesday 17th September may still go in their favour.

Remember you can now follow Leading the Line on the brand new Twitter page @LeadingtheLine. Here there will be live insight from the games, comments on the breaking stories from the world of women’s football news as well as early sight of what will be coming via the podcast and on the website. It’s right good!