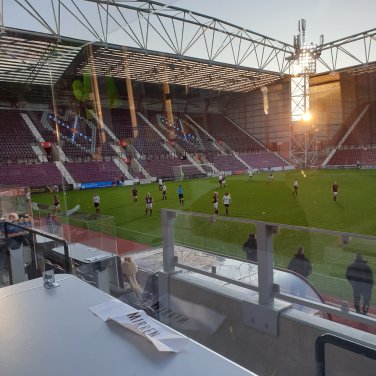 Hearts secured the Scottish Building Society SWPL2 title and promotion after a hard fought 3-0 victory against Partick Thistle in front of a league record crowd of 1,050 at Tynecastle Park.

The league leaders going into the last round of fixtures knew that a point would be sufficient to seal the title and promotion to Scotland’s top tier but any slip up and Hamilton Accies could snatch glory with a victory away to FC Kilmarnock, the latter of which eventually not coming to pass with the Lanarkshire side going down 1-0 in Ayrshire.

In amongst some cagey opening exchanges it was the visitors who would have the first shot on target as Loren Christie pounced on a bouncing ball at the edge of the area but the strikers effort was easily held by Emily Mutch before Sophie Gallacher’s tame effort from a free kick on the right hand side was also easily gathered.

The Edinburgh side couldn’t get into any sort of rhythm during those early exchanges, but on the 20th minute the goal came that would settle Jambo nerves as midfielder Rachel Walkingshaw capitalised on a poor clearance by the Thistle defence to dink the ball over Nicolle Andrews from 20 yards out.

Minutes later Maddie Brill Edwards was played in via a long cross field ball but her effort would only graze the side-netting as the home side started to grow into the game before Jenny Smith would break free after a long arching ball from defender Claire Delworth however the midfielders decision to cross as opposed to shoot meant the Jags were able to get it clear.

It would be the visitors that would come out the quickest after the interval but it would be Andy Enwood’s side who would have the next effort when Brill Edwards squared the ball to Dani McGinley inside the six yard area with the former Forfar Farmington striker thwarted by replacement keeper Caddel. McGinley wasn’t to be denied though as on the hour mark, after good work in attack from Jenny Smith and Delworth, she swivelled in the area to put the ball under Caddel to seal the title.

The game headed through a quiet spell as the substitutions started coming thick and fast with Thistle midfielder Becky Bilsland amongst those coming off with the 37 year-old having announced her retirement earlier in the day.

The day though belonged to Hearts and they made it 3-0 on the 85th minute when McGinley showed strength on the edge of the area to put a low drive into the corner as they secured the title and promotion on the final day of what has been a highly competitive SWPL2 season.

Editor of Leading the Line and piehopping site Meat Filled Pastries. A communications graduate from Glasgow Caledonian University, he also acquired accreditation as a Radio News Journalist whilst studying at The National Broadcasting School based out of the University of Sussex. A willing traveller currently based in Glasgow who has also lived in Madrid embracing the food, football and culture of Spain's largest city. Part Glaswegian, Part Madrileño. A city boy with a love for the beautiful game. View all posts by Chris Marshall