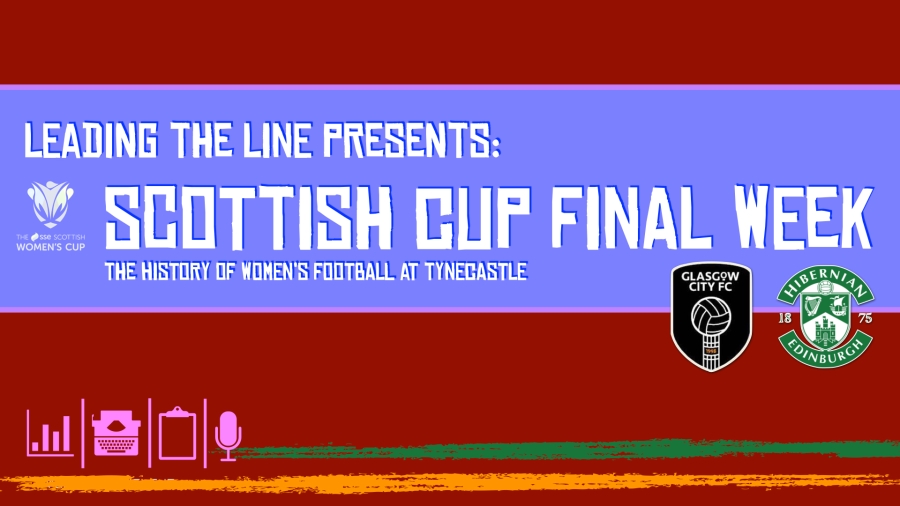 Tynecastle Park will, for the first time this Sunday, play host to the Scottish Women’s Cup Final as Glasgow City look to end Hibernian’s four year long domination of cup competitions in Scotland. Here at Leading the Line in a bumper week of preview activity where we’ll be bringing you roads to the final, pre-game analysis, coverage from the press conference, the podcast and of course game day itself we’re starting out with something a little different by taking a look at the history of women’s football at the home of Heart of Midlothian.

Tynecastle, with it’s steep banks and closed in corners has a reputation for providing some of the best atmospheres in Scottish football and even though the ground won’t be full on match day, a reality of where the domestic game stands in Scotland at present, hopes are high for a Scottish Cup record crowd with a view to eclipsing the attendance of 1,943 achieved during last year’s final at Firhill.

This however won’t be the first women’s game of the season to take place down Gorgie way with the Jambos having played twice at the venue over the course of the 2019 campaign. On May 12th Andy Enwood’s side hosted Dundee United where the Terrors claimed a 1-0 victory thanks to a second half Neve Guthrie strike in front of a crowd just shy of the 700 mark. Whilst on the final day of the season, in front of a club record crowd of 1,050, the Jambos sealed the SWPL2 title with a 3-0 victory over Partick Thistle.

The history of the women’s game at Tynecastle goes back much further than this season though, reaching back over 120 years in fact, when on the 1st May 1896 a “Novelty of the Season” was announced as Mrs Graham’s XI took on London and District. To date there has been no match report found for this clash between “Original Lady Footballers” but exhibitions of these kind were commonplace of the time.

It would be 25 years before that feat was repeated in Dalry when in 1921 Dick, Kerr Ladies travelled north to play a Scottish XI. Their story in itself is an interesting one and if you will afford me a slight tangent, a quick synopsis of who Dick, Kerr Ladies were I think is worth sharing.

A factory side formed in 1917, Dick, Kerr & Co. were locomotive and tramcar manufacturers based across two sites, Kilmarnock and the Lancashire town of Preston, with the company also helping produce ammunition during the first World War. The company was initially formed by Glaswegian William Bruce Dick in 1854 with Dick joined in partnership 29 years later by East Lothian born John Kerr. With the addition of Kerr’s tramway business the company was re-christened Dick, Kerr & Co. and it continued to thrive during the Great War years.

The concept of embracing women’s football within the organisation was initially seen as taboo and counter-productive, however with war raging and bosses searching for initiatives to boost the morale of their female employees who were (with the majority of the male workforce sent to the trenches) the beating heart of industry in Great Britain at the time play soon commenced during breaks, the women quickly getting the better of their male co-workers before defeating Arundel Coulthard Factory 4-0 in front of 10,000 fans at Deepdale, home of Preston North End.

Widely considered one of the most successful sides of the era they were soon going international traversing the continent to compete against national selects usually in the name of a good cause. There match against the Scottish XI was no different as, in front of 15,000 fans at Tynecastle, they ran out 13-0 victors raising £800 for ex-serviceman in the process with Misses Parr, Redford, Haslam, Harris and Mills, all getting on the scoresheet.

Whilst the Scottish side that day suffered a heavy defeat the national team of the modern age have found some success on the eight occasions that they have played at the venue since 2008, although as is always the case with Scotland there has been heartache along the way too.

In October 2018 a double from current Scotland U19 Head Coach, Pauline Hamill, wouldn’t be enough as Scotland fell 3-2 in the first leg of their Euro 2009 play off against Russia. The Scots would win the return fixture 2-1 but would be eliminated on away goals. Almost a year to the day later, in World Cup Qualifying, Scotland earned their first victory at Tynecastle when a Suzanne Grant double and a Kim Little goal secured a 3-1 victory over Georgia. That would, unfortunately, form part of another unsuccessful campaign but the good results would continue as two years later Anna Signeul’s side would rack up a 7-2 victory over her future employers Finland, with current SWNT squad members Hayley Lauder, Jennifer Beattie, Jane Ross and captain Rachel Corsie all on the score sheet, although it should be said that their upcoming Euro qualifying games in 2020 will be considerably closer than the result that day.

Tynecastle then became the base for Scotland’s Euro 2013 Qualifying Group 4 campaign, yet another that would see the squad come so close before ultimately missing out on qualification. Following victory away to Israel in their opening contest Scotland were held to a 2-2 draw at home by Wales before another clash with Celtic cousins, this time in the shape of the Republic of Ireland, proved more fruitful as two goals in the last five minutes from Rhonda Jones and Christie Murray sealed a 2-1 victory. An 8-0 win over Israel in June followed with Kim Little scoring a hat-trick but it was the activity on the terraces that day which still stick in the memory as amongst the 817 in attendance were a pocket of pro-Palestine protestors who spent little time watching the game other than to heckle the Israeli players and boo the national anthem making for a very different match day atmosphere. By the time the Scots group campaign came to an end with a 5-0 defeat at home to France, Eugenie Le Sommer scoring a double, another playoff opportunity appeared on the horizon but Signeul’s side suffered again, this time in extra time eventually losing out 4-3 on aggregate to Spain with Hampden taking over the hosting duties.

The stadium would be venue for even more playoff anguish in 2014 when Scotland were knocked out at the first round stage by The Netherlands. The 4-1 aggregate defeat including a 2-1 loss at Tynecastle in the the home leg with Little again the Scotland goalscorer.

For the national side at least, the maroon of Tynecastle looks set to take a backseat to the green of Easter Road following a successful outing at the Leith venue for Scotland at the start of Euro 2021 qualifying however, a 120+ years of history at Tynecastle should maintain as Hearts continue to progress towards a one club model and with events such as this season’s Scottish Cup Final taking place. It can be seen to be sure that one of Scotland’s great footballing venues will see women’s football played there again very soon indeed.

This year’s SSE Scottish Women’s Cup Final between Glasgow City and Hibernian takes place this Sunday 24th November with kick off at 4.10pm. Tickets are available from the Heart of Midlothian website here and on the gate on the day.

4 thoughts on “#SSESWCup Week: The History of Women’s Football at Tynecastle”